Transform your child's bedroom out of this world with our space bedding featuring astronauts, space ships, planets, aliens, robots and everything you can imagine in space. Our space bedding includes quilt/duvet covers in single and double bed sizes, sheets, cushions and other bedroom accessories and is a popular choice for a boys bedroom theme.
View as Grid List 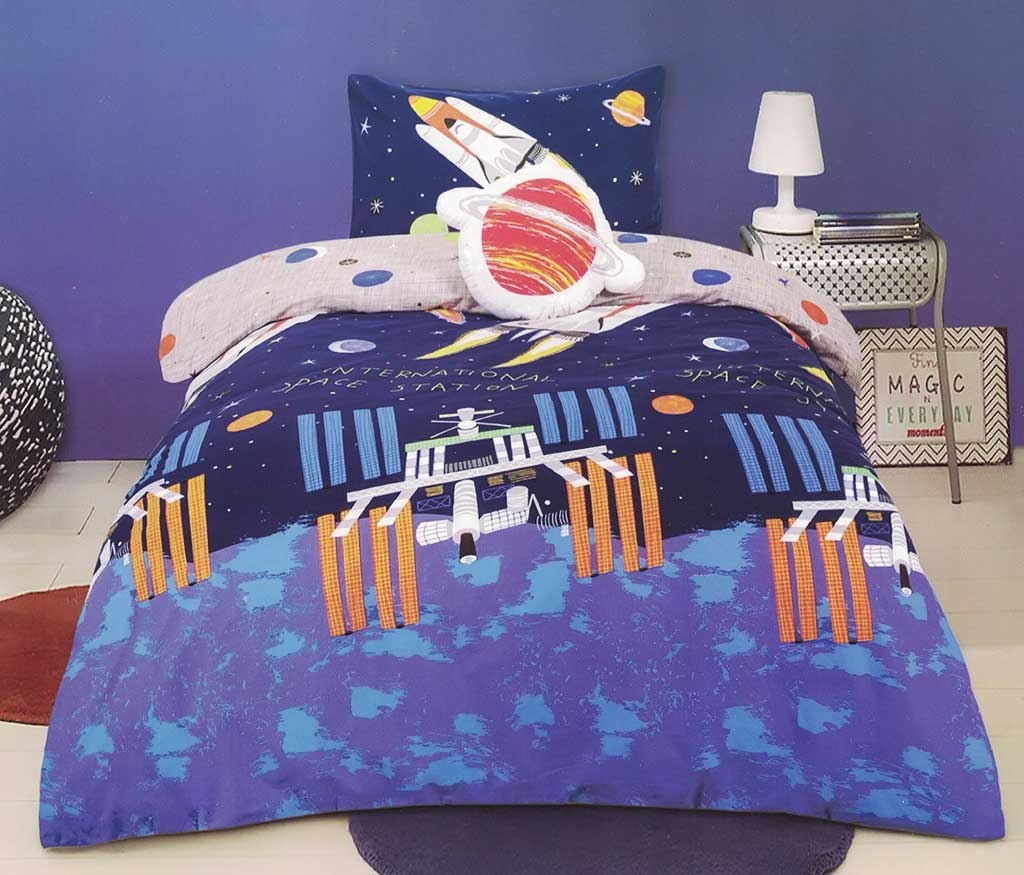 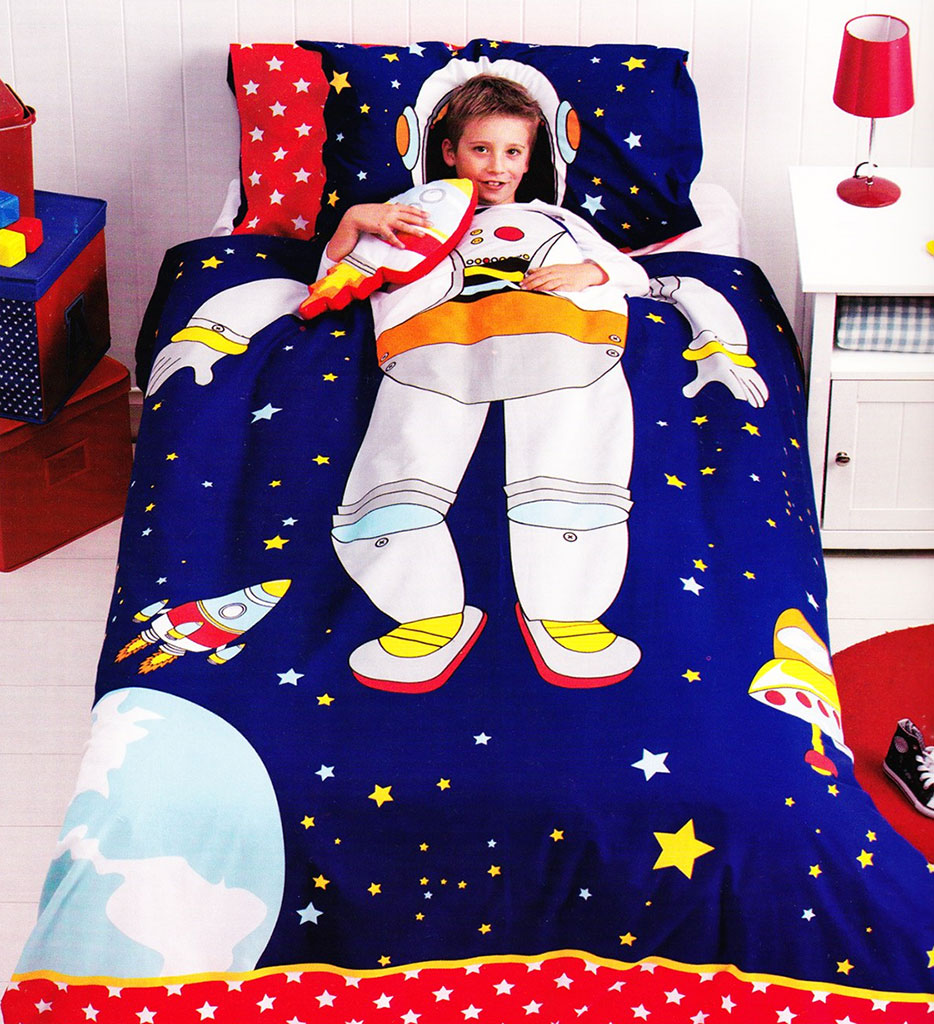 Little astronomers that dream of becoming a space traveller will feel just like an astronaut with this awesome Spaceman bedding set. The fun space design features a large motif of an astronaut in a spacesuit floating in outer space among a galaxy of stars and planets with a rocket and a spaceship on the quilt cover with the space helmet on the pillow case, so that your child transforms into a spaceman when they’re tucked away in bed. 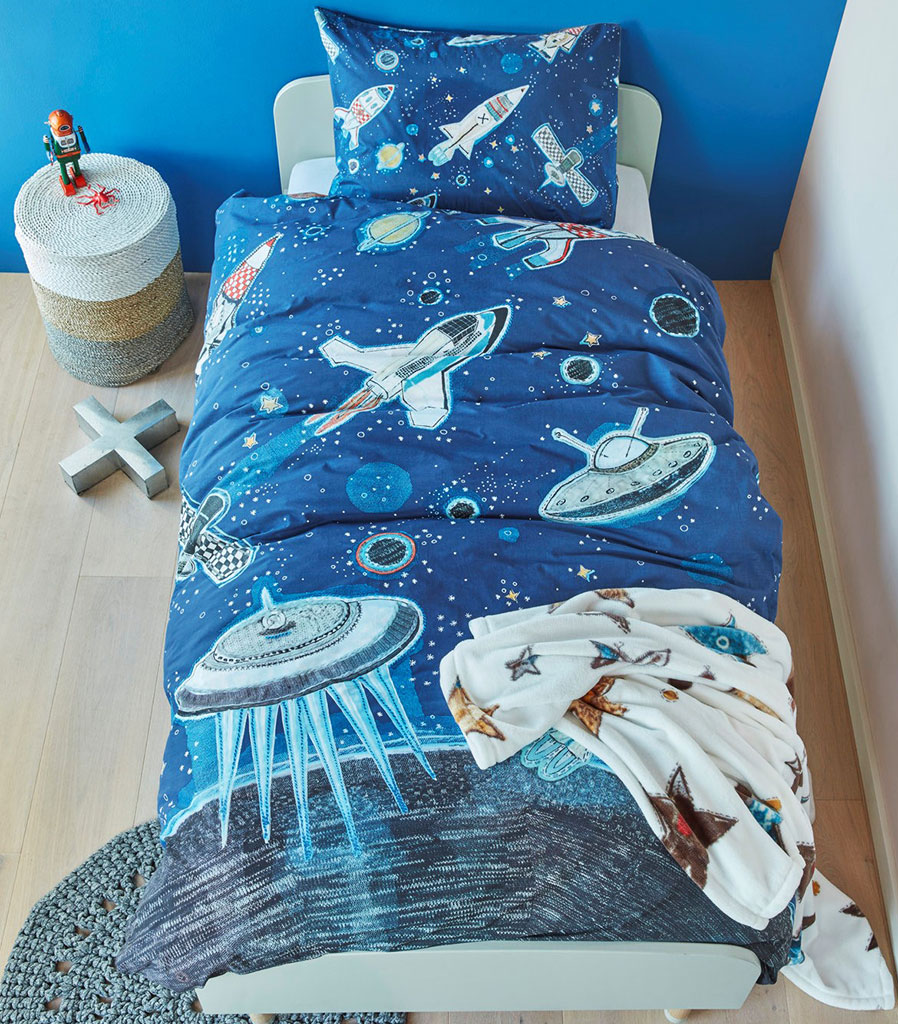 Rockets and spaceships will delight aspiring astronomers and transform a children's bedroom into the wondrous cosmos with this fabulous Space bedding set by Bedding House. Modern astronomy design features a large motif of a scene from outer space with rockets, satellites, spaceships and UFOs in flight surrounded by a universe of planets and moons orbiting them, black holes, stars on the duvet cover and pillow case. 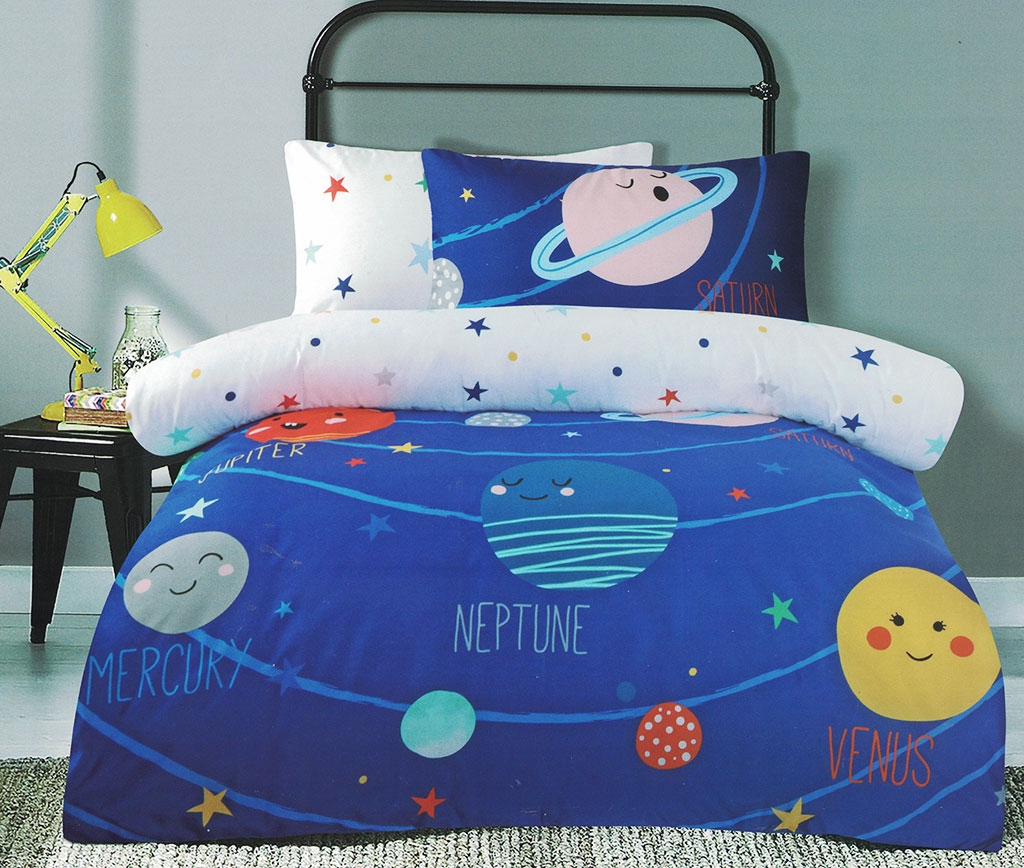 Super cute design of planets in space that little astronomers will love featuring a fun solar system design print of the planets from our solar system, with their names beside them that includes Mercury, Jupiter, Saturn, Neptune and Venus with swirls of their orbit all over the duvet cover and pillow case. 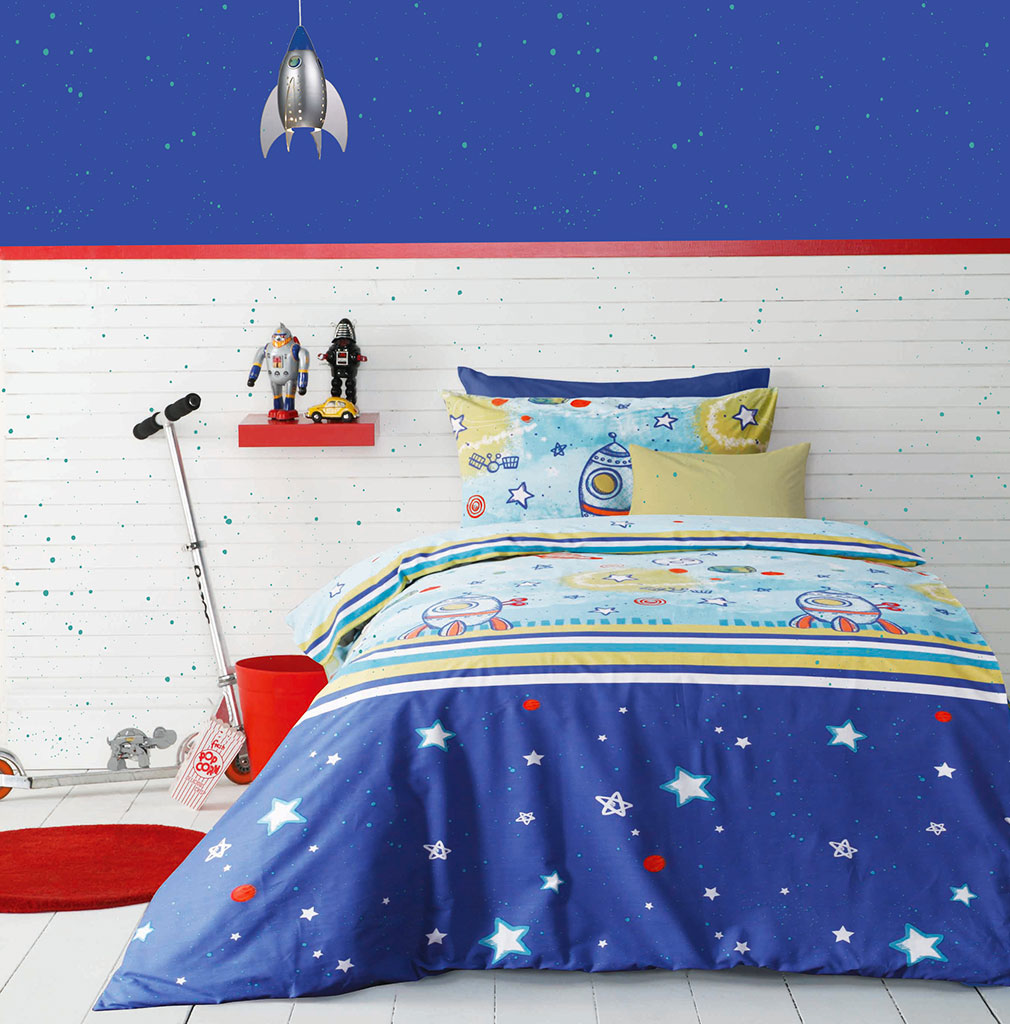 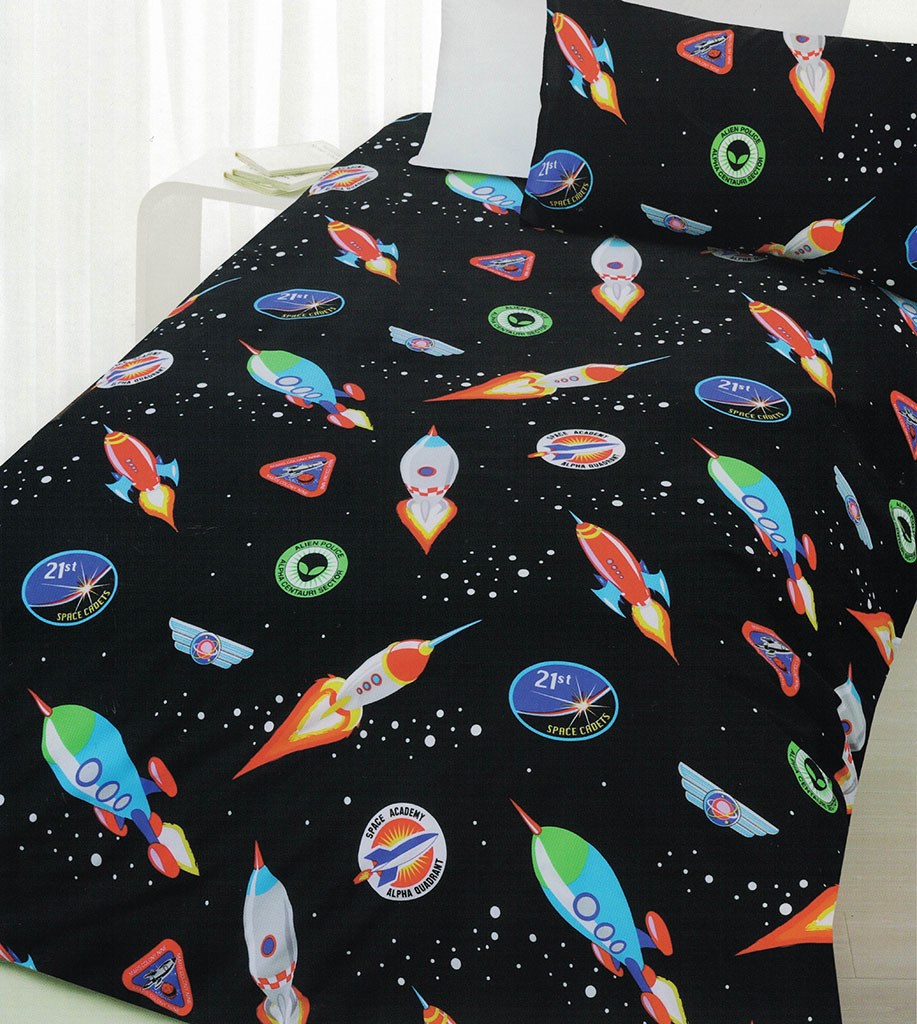 Take a trip to another galaxy in outer space with the Spaceships bedding set featuring embroidery and appliqué. Luxurious design features embroidery, appliqué and ribbon with the left side of the duvet cover featuring planets, moons and stars with ‘Moon!’, ‘Rocket!’, ‘Boom!’, ‘Blast off!’, ‘Galaxy!’ and ‘Stars!’ printed throughout, separated by decorative ribbon and a space scene of rockets and spaceships among stars. 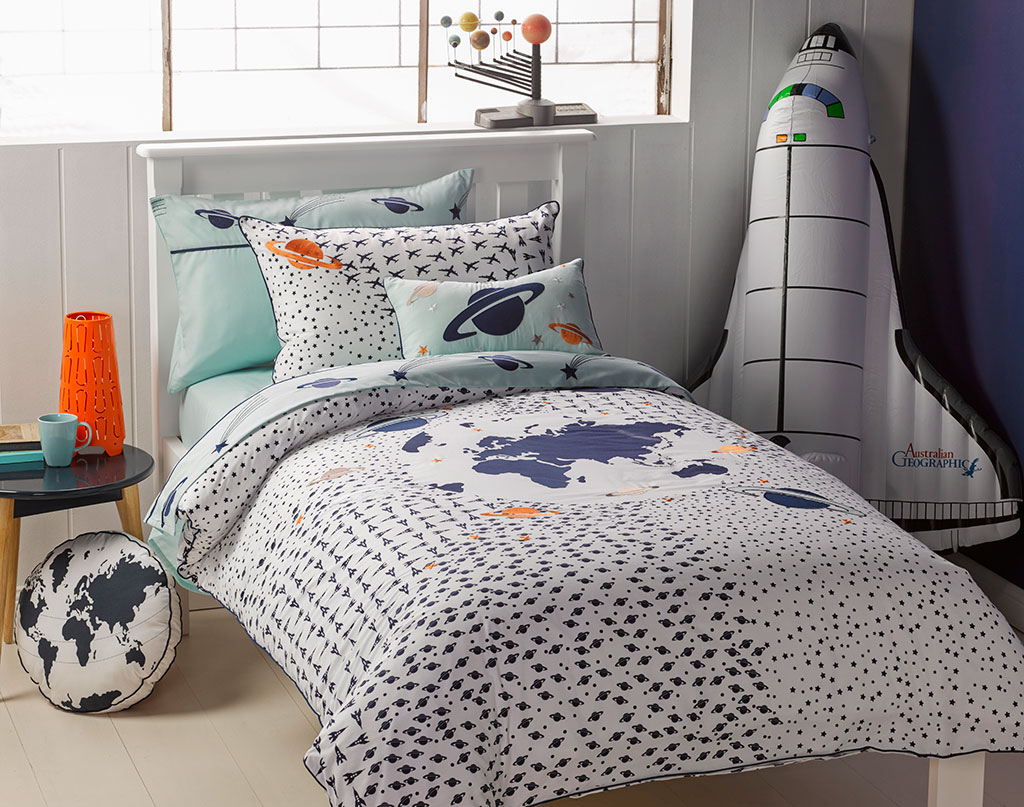 Aspiring astronomers and astronauts and admirers of the majesty of the universe will love the Take Off bedding set. Outer space design features embroidery and appliqué with the Earth as the central focus on the duvet cover surrounded by planets within the solar system on a repetitive background of planets, rockets, spacecraft and stars. Cushions, inflatable spaceship and model solar system offer decorative elements to the bedroom. 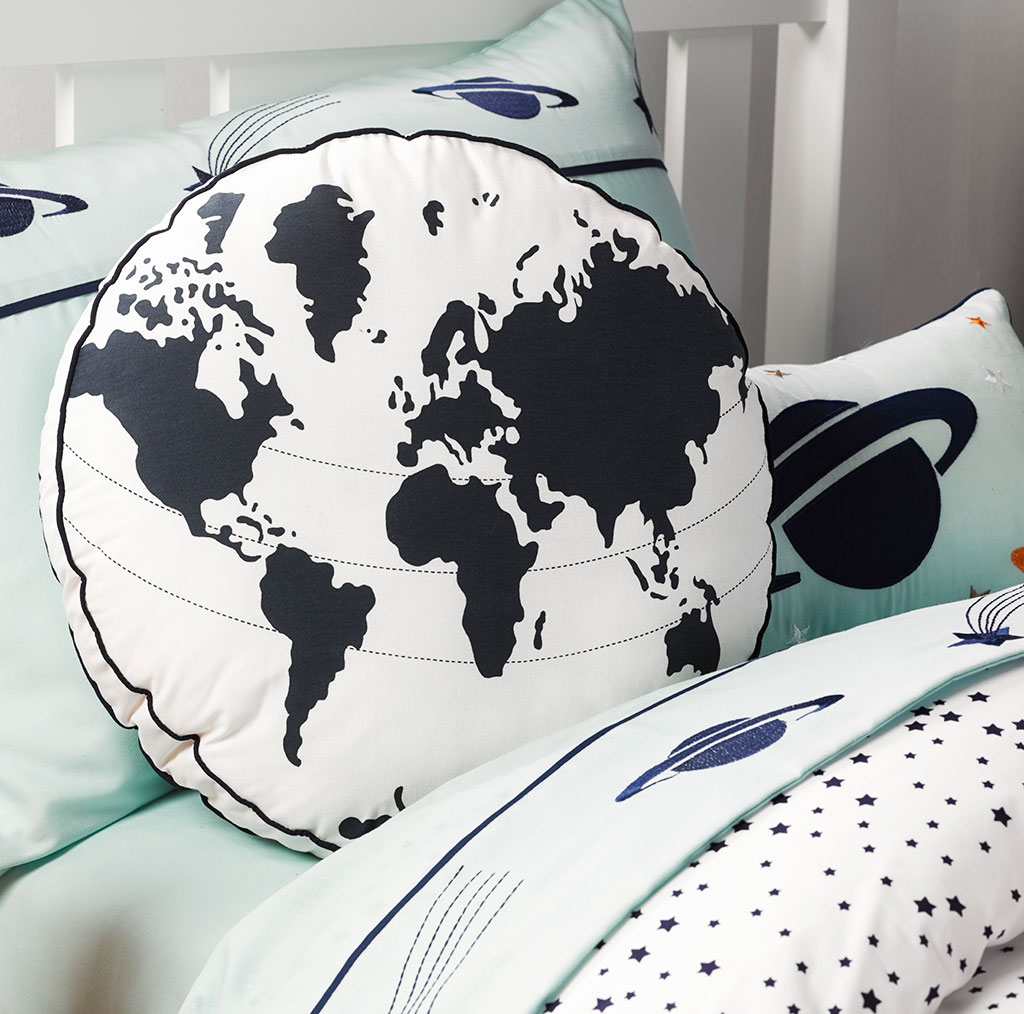 The Take Off cushion of the world is round shaped and a fantastic decorative bedroom accessory for the Take Off bedding set from the Whimsy contemporary children's bed linen collection and is perfect for a fun space bedroom theme. 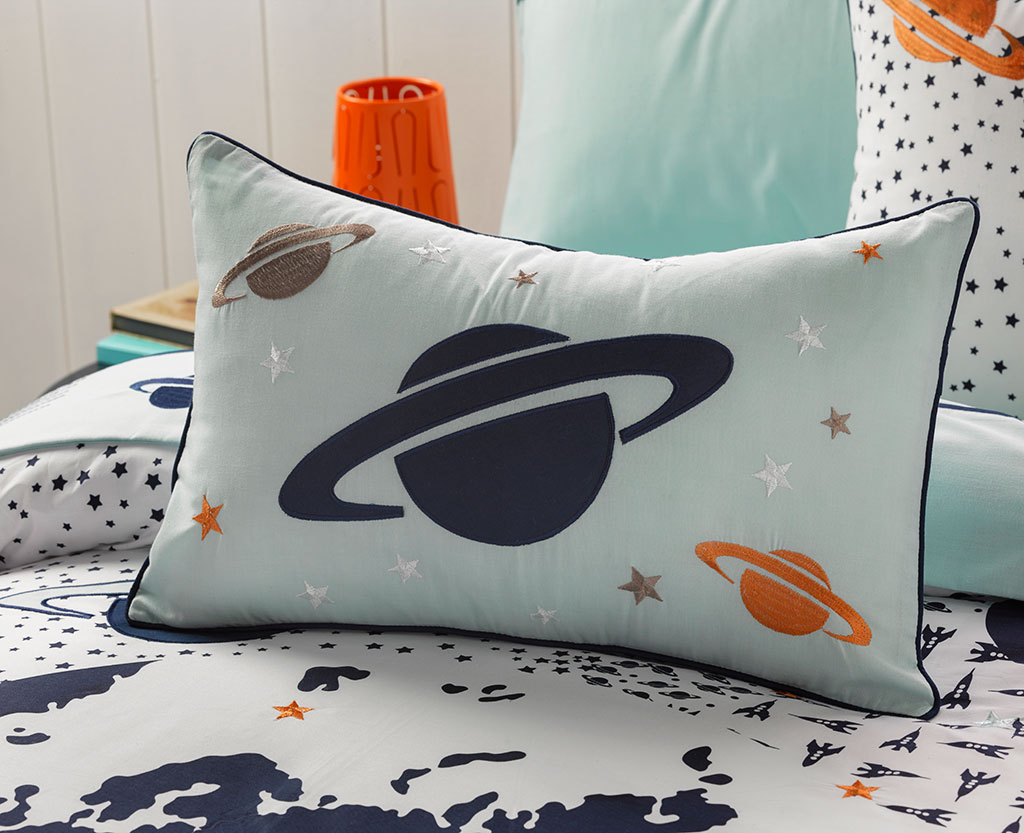 The Take Off planet cushion is oblong shaped and features planets and their ring systems and stars and is a fun decorative bedroom accessory for the Take Off bedding set from the Whimsy contemporary children's bed linen collection and is perfect for a fun space bedroom theme. 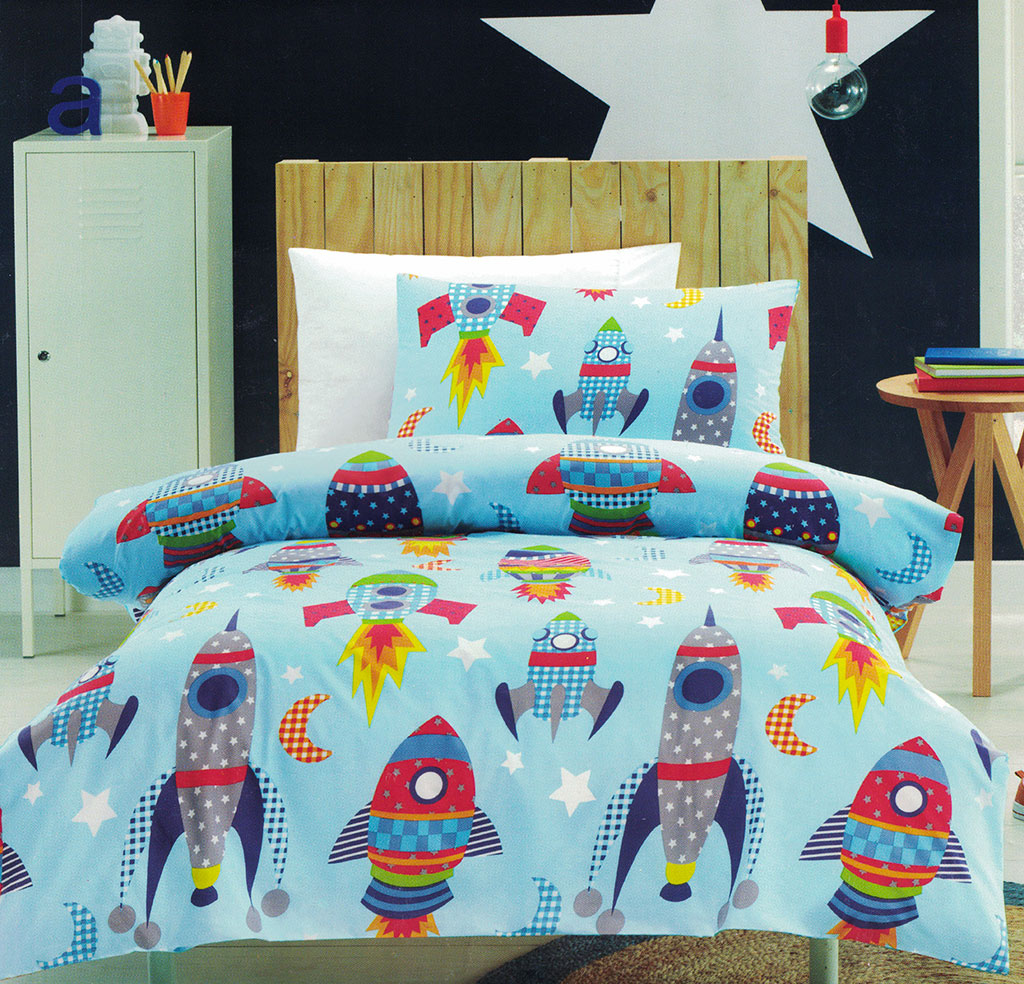 Rockets can launch your child's bedroom into outer space with this bright and colourful Rocket bedding set. Super space design features a repeating pattern of many different rockets and spacecraft with colourful patterns, ready for lift off, some with propellant fire and surrounded by stars and moons over the duvet cover and pillow case. Star wall decorations create an out of this world bedroom theme for boy's and girl's with a passion for exploring the universe beyond our earth. A constellation of glowing stars will transform your child's bedroom into the spectacular night sky with this space theme bedding set. Stellar design features a repeating pattern of constellations of stars throughout the dark expanse of the night sky with shape formations and groups of stars all over the duvet cover and pillow case.

Shop By
Shopping Options
Color
All Categories
Bedding
Themes
Characters
Girls
Boys
Teen
Baby
Materials
Compare Products
Compare
Clear All
You have no items to compare.
My Wish List
Last Added Items
Go to Wish List
You have no items in your wish list.